“It isn’t easy being green,” said Kermit the frog. It sure isn’t

As we need not tell you, for some time now we have been hammered with the message that we should be “green,” which among other things means that we should reduce our fossil-generated electrical power consumption because that reduces carbon dioxide emissions and will stave off climate change. And one good way to do that is to reduce consumption of electrical power generated by fossil burning power plants by replacing at least some of it with solar power — you install a photovoltaic cell array or another type of solar power equipment on your roof and its output replaces some of the fossil-fuel power generated with fossil burning utility companies with sunlight. Companies like Stinson Air provide solar paneling for homes so that homeowners can cut down their electrical bill and reduce the amount of energy they use. Speaking of lowering energy bills, for many households, finding lower rates on energy bills could be as simple as doing some research into Power to Choose Texas, for example, in the hopes of finding an alternative energy provider that can help the family save money on their energy bills. It’s about finding a company you can trust.

Additionally, the government then subsidizes the cost of your photovoltaic array. Is that cool, or what? If you are interested in installing solar panels to your home, then you may find that it is important for you to think about how much energy does a solar panel produce before making the decision. Another thing to consider when deciding whether to get solar panels is your roof. Most solar panel companies will require you to have your roof assessed for damage or even replaced before they install the panels, so it might be worth getting in touch with some roofing companies austin or wherever you may be. The reason being, if the roof requires any repairs after the panels are installed, the panels will need to be taken off and reinstalled on the new or repaired roof, costing you more money than necessary.

Unfortunately, the first law of thermodynamics still operates and somebody has to pay for that power. As the number of photovoltaic arrays on home roofs is growing, the electrical power generating utilities have come to realize that the value of that sun-generated power (and the homeowners’ resulting savings) are coming out of the utilities’ income stream. Oops. What now? If you are interested in utilities and checking out comparisons then you may want to check websites such as www.utilitybidder.co.uk.

The New York Times reports that some of the power generating companies are doing something about that, and are demanding that retail power users who use photovoltaic power pay a fee to the utilities, to make up for the revenue loss. And so in Arizona, “owners of solar panels would have to pay a new fee to power companies.” Diane Cardwell, Compromise Defers a Solar Power Fight, N.Y. Times, Nov. 16, 2013.

“The Arizona Corporation Commission [which regulates public utilities], agreed . . . and set a fixed charge [of] 70 cents per kilowatt of system capacity, to pay for it. That works out to roughly $5 a month for an average system, rather than the $40 to $50 [per] month the utility wanted, though that would have included an upfront cash subsidy.”

So what we appear to have on our hands is the sort of nonsense of yore, when Uncle Sam subsidized tobacco growers, and simultaneously demanded that people stop using tobacco products.

Which brings to our mind a question. Whatever happened to Reddy Kilowatt? Remember him? 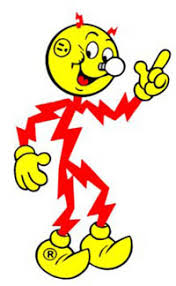