Any day now a new law review article should be published. It’s entitled Detroit and the Decline of Urban America, 2013 Mich. St. L. Rev. 1547, and it was authored by your faithful servant. It deals with the causes of decline of older American cities; what caused their populations to leave en masse and move to the suburbs, leaving behind empty swaths of urban desolation (If you want to see how desolate, go to Google, type in “ruins of Detroit” and hit “enter.’ Here are some samples). You’ll get the picture — literally and figuratively. And Detroit isn’t the only one like that, even if it presents us with the worst case scenario come alive. There are others, just as bad, except that they haven’t [yet] filed for bankruptcy — Gary, Camden, Cleveland, Pittsburgh, Newark, Youngstown, Trenton, et al.

So what happened? The people who used to live in these cities did not just up and move out on a whim, did they?

In that article, we identify and take note of six factors that were instrumental in bringing about the mass abandonment of cities:

“First, there was the creation (under the GI Bill) of a large, new, college-educated middle class with all its middle-class aspirations and appetites, including a desire and the means for acquisition of middle-class suburban housing.” The post-World-War II availability of low-cost homes in the suburbs (like Levittown) was the starting gun that sent middle class urban populations to move outward.

“Second, middle-class city dwellers were motivated to leave cities to escape riots that swept cities beginning in the 1960s, and the increasingly catastrophic decline in the safety and quality of public schools—to say noth-ing of forced bussing of middle class-children to decrepit and unsafe inner city schools.

“Third, they were escaping rising urban prevalence of drugs and a rise in urban crime, notably in the 1970s.

“Fourth, they were responding rationally to the physical devastation brought about in cities by construction of federally financed highways and by urban redevelopment, which, at its peak, displaced hundreds of thousands of urban dwellers annually.”

“Fifth, they were taking advantage of generous government tax and housing policies as well as federally guaranteed mortgage loans that enabled them to buy desirable suburban homes on an unprecedented scale, thus granting them access to an agreeable lifestyle that until then was the prerogative of the well off. Feminism brought better paying jobs to women who could now pool their resources with those of their husbands, and thereby afford homes in the suburbs, that were far better than what was available in declining cities.

“Sixth, the suburban family home turned out to be a hugely successful, tax advantaged investment that provided middle class families not only with shelter, but also with unprecedented nest eggs for their old age. Even after the housing crash of 2008, the ownership of a family home continues to be viewed as a highly desirable asset as shown by the current rapid rise in the prices of family homes. To borrow Willie Sutton’s memorable phrase, “That’s where the money is.” And that is also where the middle class is, and that is where it means to stay.” 2013 Mich. St. L. Rev. at 1563-1564. And remember. most homes are not underwater; their owners, especially those who bought their homes 20-30 years ago, are still enjoying large equities that provide them, even today, with undreamed-of nest eggs for their old age. Bottom line: Those little two-bedroom, $10,000 homes of the 1950s are now selling for around $400,000. Not bad!

You may also find interesting the 1944 statement of then Detroit Mayor Edward J. Jeffries to a congressional committee (at p. 1550), accurately predicting that laying out of freeways through cities would cause city populations to take advantage of them in order to move for the suburbs, using those freeways to commute to city jobs, but leaving cities in a state of devastation and eventually causing them to file for bankruptcy.

And finally, don’t miss the picture at p. 1560, depicting the 1950s mass move-in into new suburban homes out of cities. Thus, you could say that Uncle Sam bribed your Mom and Dad to leave cities and move to the suburbs by providing all sorts of funds and federal tax advantages, so that leaving increasingly shabby and dangerous cities and moving to the suburbs, became a no-brainer.

It’s all there, and more. So give it a shot. The article is coming out (from the printer) right now and should be in circulation presently. 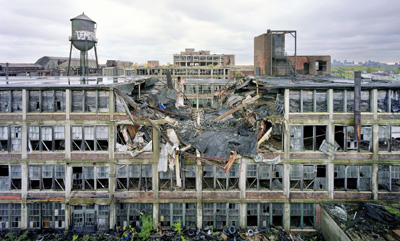