It’s getting to be so that you can’t rely on any purportedly scientific news in the newspapers. Take fats, for instance. First we were told that butter and animal fat (like lard) were bad for us, so we switched to margarine. Then we were told that margarine was hydrogenated oil and as such full of icky transfats. So off we went to consuming olive oil, with fancy Italian restaurants duly providing little dipping dishes the better to enjoy that wonderful, crusty Italian bread without clogging our hearts. Now, we are told that bread and pasta (heretofore deemed to be the cat’s meow nutritionwise) are out and traditional animal fats are in because it turns out they are actually good for us. So what do we put butter on? That, they don’t tell us so we don’t know, unless you are a disciple of our Grandma who averred that to be a good cook you have to start with at least a half-pound of butter, and the rest then doesn’t much matter. By her lights, you could put butter on everything (except meat, of course). So we are now back to marbled steaks and such. But no buttered potatoes to go with them because those are full of carbohydrates that, as you may recall, are bad for us too. See http://online.wsj.com/news/articles/SB10001424052702303678404579533760760481486

To say nothing of gluten which we have been serenely consuming as part of bread, particularly whole grain bread which — here it comes again — was said to be good for us, but turns out to be bad because whole grain or not, it is a carbohydrate-laden food and carbohydrates are, as you will recall, bad for us. Our all-time favorite meshuggas in the bread-eating department is a big sign on a local bagel shop that advertises “Gluten Free Bagels.” In case you are not into Hebraic gastronomics, be advised that what makes bagels bagels (rather than rolls with a hole in the middle), is that they are made of high-gluten flour and are boiled before being baked. So gluten-free bagels would not be bagels; they would be more like alcohol-free single malt Scotch. But don’ worry too much about that: gluten is bad only for people suffering from iliac disease which most of us are spared. So if you are going to commit suicide by eating bread, you may as well eat it gluten and all. And by all means, if you are going to eat bread, do try some real rye bread (almost unobtainable in our part of the country) — you may as well die happy.

But according to its title, wasn’t this post supposed to be about trees? Yes it was. But we had to digress into that other stuff to make our point that this is part of a larger problem — scientific conventional wisdom keeps changing so we can’t tell what is good and what is bad for us.

OK. Let’s talk about trees. For lo, these many years we have been taught as an article of faith, that trees are our friends because, apart from being pretty and producing great-tasting fruit, they draw carbon dioxide from the atmosphere, thus aiding human pollution fighters. They also emit oxygen that we can breathe and prosper. Right? Wrong. Well, I was going to find a tree surgeon near me to cut down a couple of pesky birch trees overhanging the end of my garden but I decided against it because ‘trees are heroes’. Well, looks like I’m going to have to think twice now!

Along comes a Yale assistant professor of atmospheric chemistry named Nadine Unger who, in an op-ed in the New York Times informs us that trees are actually bad for us, and that preventing the chopping down of forests may actually be a bad idea environmentwise. To Save the Planet, Don’t Plant Trees, NY Times, Sep. 20, 2014, at p. A19. Yikes! What’s next? Is nothing sacred? Evidently not. At least not at Yale. We know that trees can sometimes pose a danger to us if they are not properly maintained and sometimes even require being removed entirely, using services like that of treeserviceremoval.com, to mitigate any risk – but I’ve never heard anything like trees being bad for the environment!

Since we only claim some expertise in an unmentionable area of the law, but not in earth science, we have no intention in getting into this controversy (which, if it isn’t one already, is certain to become one) let us relay to you the essence of Professor Unger’s grim message:

The understanding of photosynthesis imparted to us in school, says she, is a gross oversimplification. In the Amazon jungle, “almost all of the oxygen [produced during the day] remains there and is reabsorbed by the forest at night. In other words, the Amazon rain forest” — whom some global warming mavens have dubbed “the lungs of the planet’ — “is a closed system that uses all its own oxygen and carbon dioxide,” leaving none for us. Bummer. Can it get worse? Yes, it can, and here it comes:

“Trees emit reactive volatile gases that contribute to air pollution and are hazardous to human health. These emissions are crucial to trees — to protect themselves from environmental stresses like sweltering heat and bug infestations.”

As these compounds mix with fossilized pollution from cars and industry, an even more harmful cocktail of airborne toxic chemicals is created.

So Professor Unger notes that maybe the ridicule heaped on President Ronald Reagan in 1991, when he said that ‘Trees cause more pollution than automobiles do’ may not have been fully justified.

Since, as we said, our background is not earth science we conclude by suggesting to the earth science mavens who instruct us, (a) that they should engage in an open and honest discussion of Prof. Unger’s position, so we can learn about it and have some basis for evaluating it, and (b) they should ponder the wisdom of the jocular version of the laws of thermodynamics, that make clear the intractability of nature. Though a put-on in their present formulation, they contain a large element of scientific truth, and reduce themselves to the following:

Second law: you can’t break even,

Third law: things are going to get worse before they get better, and

Fourth law: who says they’re going to get better?

So maybe the planet does its thing (possibly even according to God’s design — we’re not getting into that one either) and there isn’t much that can be done about it, particularly as long as China and her third-world cohorts pollute the air on such a scale that in Beijing, for example, it’s hard to see in broad daylight. 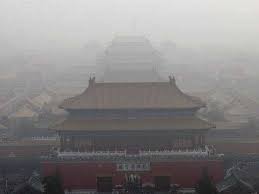 Follow up. Guess what? No sooner did the ink dry on the printout of the above post about climate and trees, that the New York Times has fired the other barrel of the global warming shotgun. We learn from that august source that a new study has found that ocean warming that has made so much news lately, is actually caused not by human activity, but by changing winds. “[T]he new analysis, which relies on wind, barometric pressure and temperature data recorded from 1900 to 2012, concludes that human activity has little impact.” Michael Wines, Human Role in Warming of Northwest Played Down, N.Y. Times, Sept. 22, 2014 (emphasis added). http://www.nytimes.com/2014/09/23/us/study-discounts-human-impact-on-rising-temperatures-in-northwest.html?ref=science

Second Follow-up. And speaking of other, developing countries, don’t miss today’s NY Times, Coral Davenport, Emissions From India Will Increase, Sep. 25, 2014, at p. A5, which reports that the environment minister of India has explained that his country has no intention of cutting its greenhouse gas emissions, because its first priority is to alleviate poverty and improve India’s economy. The not-so-hidden message to Uncle Sam was: if you want to save the world from those greenhouse gases, you can do so on your own nickel, being as the condition of the world’s environment is due to western societies’ historical disregard of such matters — or, if you want to reduce India’s message to Uncle Sam to it’s essence, it would be “You crapped it up — you fix it.”