After Hurricane Sandy caused damage to beachfront property in New Jersey, so much that if it was to occur today then there is a chance that local services such as Water Mitigation Services and insurance companies might be left overwhelmed. For this reason, the state decided to prevent a recurrence by having the US Corps of Engineers build new dunes along the beach, hoping that they would hold off the surging surf in case another hurricane came along. But some of the owners of beachfront homes oppose this solution because the new dunes would impair or destroy their ocean view. Which sounds reasonable — what’s the point of paying extra for an oceanfront home if you can’t see the ocean? You could also argue what’s the point of owning an oceanfront home only to have it succumb to the power of a hurricane too? There are things homeowners can do to prepare their homes for such an incident. Ensuring that guttering is free of blockages can help to prevent leaks and damage to a home’s foundations. Services like Clean Pro Gutter Cleaning NJ can help with mitigating the chance of a blocked gutter becoming the cause of significant damage.

There is more to it than that. Some of the owners point to existing seawalls and contend that they are as good as the proposed dunes, so there is no point in replacing them. Now, things get sticky. The Corps is willing to do the job and spend the millions required to do it, but it evidently wants the state to acquire the necessary land for those dunes. Further, the state — personified by Governor Chris Christie — demands that the affected beachfront homeowners donate (as in gratis) the necessary land, to which the aforementioned owners have replied with a polite variant of “Hell, no!” After the last presidential “debate” we know (from Governor Chrstie himself) that you mustn’t be rude in New Jersey. Just kidding, folks; the guv was the soul of politeness, given the provocation to which he was subjected.

Beyond that, some of the objecting owners have hired a first-class eminent domain lawyer, Tony Della Pelle of McKirdy & Riskin, who has filed an action on their behalf, arguing that the state should retain the seawalls which they have recently reinforced, which they contend, would do the job, preserve their property rights, and coincidentally, save the state a bundle of money.

So the battle has been joined, and we await the results of litigation round one. We wish Tony (whom we happen to know and of whom we think highly) the best of luck in this uphill fight. Why uphill? Because when it comes to choosing how to address the problem that is to be solved by the public project, judges just don’t like to listen, much less to rule against the government’s choice of solutions (See the post on Public Necessity which just happens to precede this one).

Anyway, stay tuned because this promises to be an interesting battle, with the last word to be delivered by the appellate courts. The U.S. Supreme Court already touched on it in the Renourish the Beach case which turned out to be inconclusive, so maybe their Lordships will want to take another shot at it.

By the way, though the NY Times is silent on this specific point, there is possibly the question involved here whether the new dunes will also create a new stretch of beach, and whether the Corps or the state would own it. If so, count on another battle as to who owns the new, artificially accreted beach.

Word reaches us that in a case in New Hanover County, North Carolina, involving the taking of the property of a building supply company, the state DOT presented evidence of $303,000 as just compensation (and later offered $700,000). The owners demanded $1,000,000 to settle. After trial, the jury verdict came to $2,995,000 — the amount of the owners’ evidence. After adding interest the total award came to $3,426,000. That’s over eleven times DOT’s original offer.

It isn’t every day that an obituary sets one thinking about matters of eminent domain law. But it just happened in the case of the N.Y. Times obituary of judge Richard J. Cardamone of the U.S. Court of Appeals for the Second Circuit. Sam Roberts, Richard Cardamone, Judge Who Doomed Westway Project in Manhattan, Dies at 90, 10/25/15, at p. 23. Judge Cardamone opined in 1985 that the Corps of Engineers’ determination of compliance with environmental laws, and its issuance of a permit for the construction of the Westway highway project along the west side of Manhattan, was defective and would  accordingly have to be vacated and redone.  This was done even though, as the court conceded, “the voiding of the [Corps of Engineers’] permit may result in condemning the Westway project to oblivion.” Which it did.

So much for judicial protestations in eminent domain cases that when it comes to takings of land for public projects, they judges are pretty much limited to rubber-stamping condemnors’ determinations that the proposed taking is just hunky-dory public-use-wise – i.e., it’s “well-nigh conclusive.” And as for determinations of public necessity for the project, the US Supreme Court has told us, once public use is established, necessity for the public project is not a legal requirement under federal law, and the owner-condemnee is not even entitled on a hearing on this subject. As the Supreme Court put in in Bragg v. Weaver, 251 U.S. 57 (1919):

“Where the intended use is public, the necessity and expediency of the taking may be determined by such agency and in such mode as the state may designate. They are legislative questions, no matter who may be charged with their decision, and a hearing thereon is not essential to due process in the sense of the Fourteenth Amendment.”

In short, public necessity in eminent domain is weird stuff. Originally, the US Supreme Court justified takings of private property for others’ private use (like, for example, irrigation ditches and mine aerial tramways) on the ground that such uses were a matter of great necessity. As the court put it in Clark v. Nash, 198 U.S. 361, 369-370 (1905), such uses are deemed public “where it is absolutely necessary to enable [the private condemnor] to make any use whatever of his land, . . . which will be valuable only if water can be obtained.” 198 U.S. at 369-370. But a scant dozen years later, came Bragg v. Weaver, 251 U.S. 57, 58 (1919), and there went judicial review of public necessity, with the condemnee not even entitled to a hearing thereon, thereby unwittingly undercutting the holding of Clark v. Nash, which was based on a high level of necessity.

But the idea of taking land (and paying for it) where doing so is unnecessary, is so offensive to civic values that states took ostensible care of that problem by enacting statutes requiring a finding of public necessity before private property could be taken for public use. See e.g., Cal. Code Civ. Proc. § 1245.220. But even so, courts – with the exception of Florida — take the position that the question of necessity may not be inquired into unless there is fraud or bad faith on the part of the condemnor. Before 1976, California went further than that and held in the notorious Chevalier case that necessity is altogether nonjusticiable, even where there is fraud, bad faith or abuse of discretion by the condemnor. But in 1976, the California legislature made necessity justiciable in cases of gross abuse of discretion and bribery.

The reason for the courts’ reluctance to inquire into public necessity is said to be judges’ lack of background in matters of engineering and such, and their policy of unwillingness to “second guess” determinations by the legislative branch of government. For a discussion of this justification, see City of Chicago v. St. John’s United Church, 935 N.E.2d 1158, 1171 (Ill.App. 2010).

So far, so bad. But it gets worse — it’s an altogether different story outside the law of eminent domain. There, as illustrated by Judge Cardamone’s decision in the Westway case, the same judges who proclaim themselves incapable of judging questions of necessity in eminent domain cases, have to problem “second guessing” the expert public project builders in environmental review cases. Why? If you know, perhaps you can share that knowledge with your faithful servant who continues to be puzzled by judges’ professed inability to do in eminent domain cases what they routinely do in environmental review cases.

We don’t quite know how to do justice to this news item, so we ask you to go to the link below and get the story from the horse’s mouth, as it were. It’s not very long. This is a monument to what’s wrong with redevelopment, so if you have an interest in this subject, have at it.

Note that the article fails to mention how much this caper cost the long-suffering taxpayers of Los Angeles, but hey man, who cares about them?

Proceeding on the theory that one picture is worth a thousand words, this is what the Marlton Square redevelopment project area looks like after 30 years: 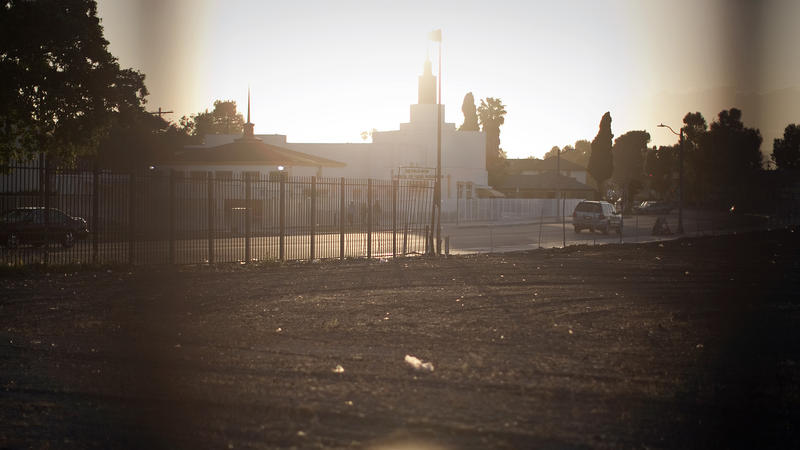 If you are wondering what happened to this blog, it was the usual — somebody hacked us and to make things more difficult, did so while we were out of town. But all is well now, and we expect to be at it again. Thanks for your patience.